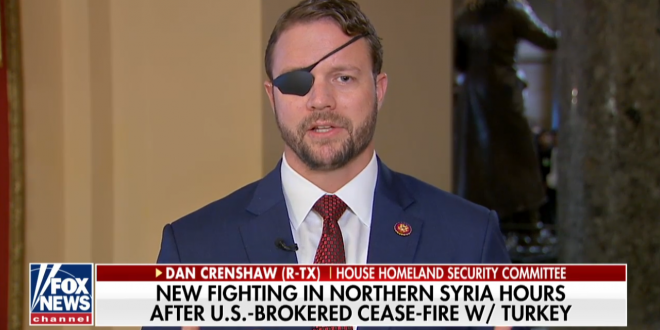 “When America leaves we create a vacuum. When we create a vacuum we create chaos, and that’s what we’re seeing right now. I applaud the president’s efforts to create that ceasefire, but we shouldn’t have had to do it in the first place. We could have simply told Turkey, who is supposedly our ally, not to send their invasion force past our troops, and I think they would have listened if we had actually made the ask of them.

“So we have this situation that we’re in now where we have to threaten them with sanctions, and we should continue to do so by the way, and we’re trying to negotiate the ceasefires, and in the last 24 hours we’ve seen lots of violations of that ceasefire already.

“In the end, it’s the same bad end state for our Kurdish allies who, whether they are being driven out by a military force that’s firing upon them or they’re being driven out because we negotiated their resettlement, it’s terrible for our Kurdish allies. And they’re the only ones who fight ISIS for us, by the way. The Turks have not been historically good about keeping pressure on ISIS.” – GOP Rep. Dan Crenshaw, on Fox News.