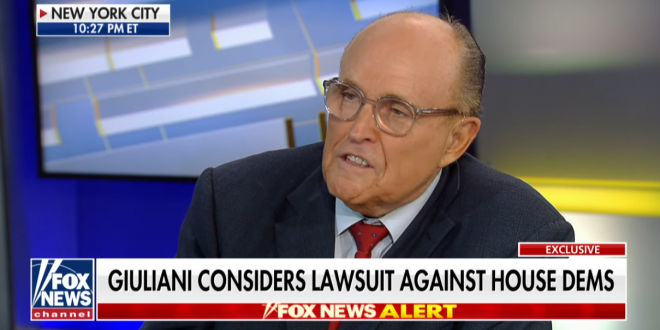 Speaking on Fox News show “The Ingraham Angle,” Trump’s personal attorney said that he “had a couple of talks” with attorneys amid the accelerating impeachment probe and a House subpoena for his own personal records concerning Ukraine.

Their recommendation, Giuliani said, was “that we should bring a lawsuit on behalf of the president and several people in the administration, maybe even myself as a lawyer, against the members of Congress individually for violating constitutional rights, violating civil rights.”

“They are doing extraordinary things. For example, they are violating — they’re interfering with the president in exercising his rights under Article II: The president United States conducts the foreign policy of the United States,” Giuliani said. “They’re calling foreign leaders. They are going to foreign capitals.”

Rudy Giuliani has revealed plans to sue “The Swamp” in federal court to end what he has called “lawless action.” The personal lawyer of President Donald Trump texted The Atlantic’s White House correspondent Elaina Plott about his desire to sue members of Congress.

Plott shared the texts in a tweet on Tuesday night as Giuliani told Fox News that he had spoken with “civil rights lawyers and a constitutional lawyer” who had recommended Trump and members of the administration bring suits against representatives on Capitol Hill.

Asked what he was planning to do next by Plott, Giuliani said: “Looking at a jaw suit to end lawless action.”

Rudy Giuliani says he is looking to sue The Swamp. pic.twitter.com/3D65Mg6VaO