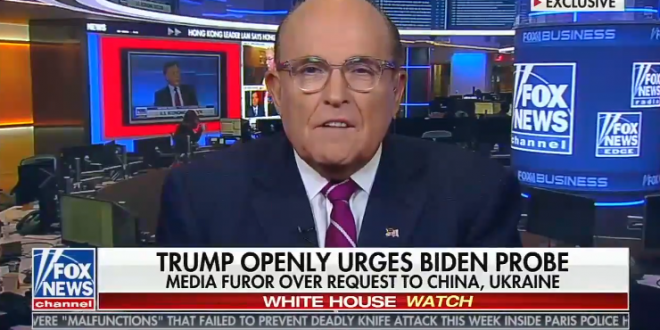 Giuliani: Trump Has Every Right To Ask For Foreign Help, Suppose A Political Opponent Committed Murder

President Trump’s personal lawyer Rudy Giuliani joined FNc’s Howard Kurtz for a marathon interview on “MediaBuzz” Sunday. “The fact is, the president of the United States has every right to ask countries to help us in a criminal investigation that should be undertaken,” Giuliani stated. “I mean, suppose the political opponent committed murder, what are we going to do? He’s a political opponent, so you don’t investigate him?”

Calling Joe Biden the media’s “honey boy,” a fiery Giuliani accused news outlets of not only failing to investigate the former vice president’s dealings in places like Ukraine, China and Romania, but of purposely ignoring the allegations. “The Washington press corps has been covering this up for the last three years,” Giuliani told Fox News’ Howard Kurtz of “Media Buzz.” “I’m trying to investigate a massive corruption scandal in the Obama administration.”

How does someone so irresponsible get to retain his law license? https://t.co/GoR5GYItHY

Rudy Giuliani says POTUS has “every right to ask countries to help us in a criminal investigation.”

Howard Kurtz: “That happens to involve a political opponent?”

Rudy: “Well, I can’t help that. I mean, suppose a political opponents committed murder. What are we going to do?” pic.twitter.com/xqW3Hzq6HQ