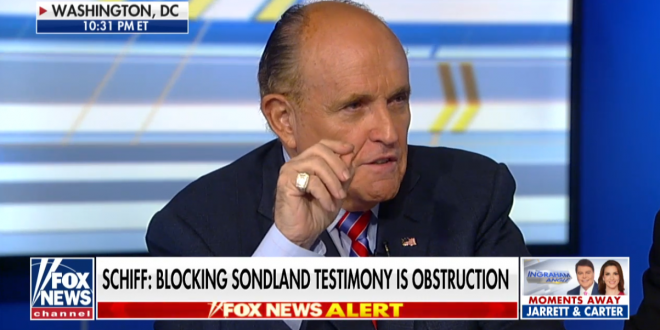 Giuliani: Salem’s Witches Had It Better Than Trump

“Of course due process is necessary. Basic fairness. The American people, when they think about this are going to be totally outraged. They actually want to impeach him on the testimony of hidden witnesses who are behind a curtain, we don’t know who they are.

“I went back to read two books about the Salem witch trials.  They required witnesses to face the witch and some witches were acquitted — it’s ridiculous. You have to go back before the Magna Carta, the only place I think where we had trials like this is in the Soviet Union. That’s what the Democrats are trying to do.

“Remember how the president used to call this a witch hunt? This is now worse than a witch hunt. The witches had it better, in other words. They had more rights.” – Rudy Giuliani, on Laura Ingraham’s show last night.