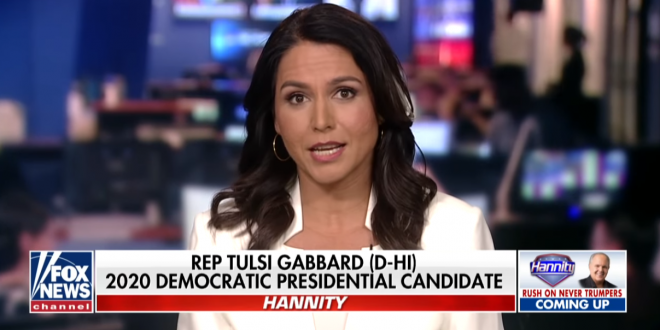 Congresswoman Tulsi Gabbard’s bizarre week in American politics continued Thursday night, when she skipped an appearance at LULAC’s Latino town hall in Des Moines, appearing that evening instead on Sean Hannity’s Fox News show. There, she criticized House Democrats’ impeachment process, a reversal of her recent stance on the matter.

Hours later, Gabbard would announce that she would not run for reelection to her Hawaii House seat, where she faces a serious primary challenge from a state senator.

Gabbard was one of four Democrats scheduled to participate in LULAC’s nationally-televised town hall, oddly co-hosted by Newsmax, a conservative news outlet. Instead, she conducted a prerecorded interview that was played on the video monitors in the hall. That also kept her away from the press corp, which interviewed candidates afterward.

New from @patrynard: Tulsi Gabbard cancelled a personal appearance at LULAC's town hall last night, sent a taped video instead, and then appeared on Sean Hannity's show to ask his viewers to help her "bring about an end to Hillary Clinton’s war-mongering"https://t.co/KDDaLDuELC