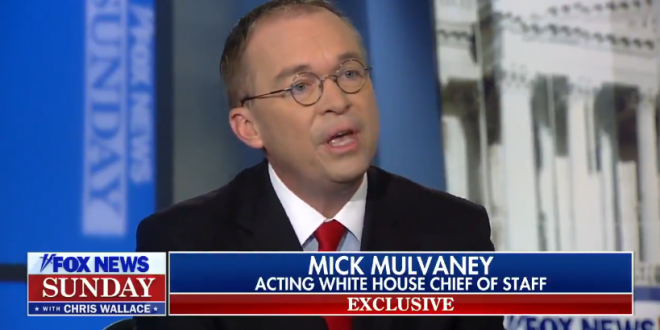 “You were asked specifically by Jonathan Karl was investigating Democrats one of the conditions for holding up the aid, was part of the quid pro quo, and you said ‘it happens all the time,'” Wallace said, referring to the ABC reporter who had questioned Mulvaney on Thursday.

Mulvaney conceded that he could see how people took his comments “the wrong way” but again insisted he never used the words “quid pro quo.” He also said that the fact that the aid to Ukraine was eventually sent should “put the matter to bed.”

THURSDAY:
Mulvaney admits to the quid pro quo. “We do that all the time.”

TODAY:
Wallace: “Why did you say…that [Trump] had ordered a quid pro quo…that aid to Ukraine depended on investigating the Democrats?”

Mulvaney: “I didn’t say that.”

The White House Chief of Staff is having a complete meltdown on Fox News Sunday right now.

So he denies it, and then Wallace plays the tape.