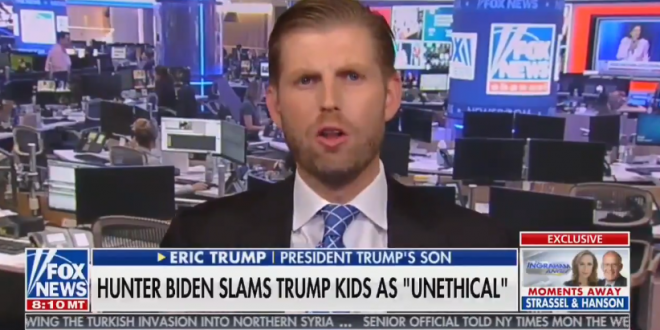 The hosts of Fox & Friends applauded first-son Eric Trump for lying about the Trump Organization supposedly ceasing all business overseas after his father, President Donald Trump, entered the White House.

Fox & Friends co-host Ainsley Earhardt praised the Trump son, saying, “I thought Eric Trump had a really good point.” Her colleague Steve Doocy responded to Eric Trump’s claims by insisting that “Clearly there is a double standard when it comes to that but we have heard about the hypocrisy before.”

As noted at the link, in the last year alone Eric Trump has worked on multiple new Trump Organization projects in India and Indonesia.

And of course, the Trump Organization continues to operate in Scotland, Ireland, Dubai, Turkey, the Philippines, South Korea, and Uruguay.

Eric Trump’s new talking point is that emoluments are okay as long as they’re made at properties his family owned before his dad became POTUS.

“I don’t think there will ever be a president who sacrificed so much of his wealth, made so many personal sacrifices,” he adds, absurdly pic.twitter.com/DshY6QMrOS