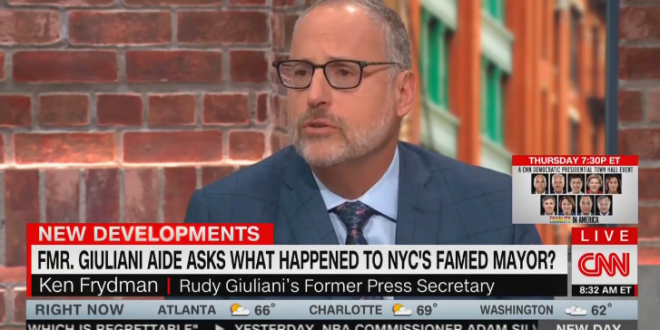 From Ken Frydman’s op-ed in the New York Times:

“America’s Mayor,” as Rudy was called after Sept. 11, is today President Trump’s bumbling personal lawyer and henchman, his apologist and defender of the indefensible. Friends and family constantly ask me, “Has he lost it? Is he crazy? How could you work for a guy like that?” At a recent dinner party, a stranger suggested that I’m not legally married because Rudy, a three-time loser at marriage, officiated our wedding.

After his mayoralty ended in 2002, Rudy went to work for what seemed like every rich bad guy and tinpot dictator who called. (So going to work for Mr. Trump made sense.) He charged $100,000 for self-aggrandizing speeches about his heroic leadership after Sept. 11. He became a multimillionaire. In perfect political symmetry, Rudy Giuliani now does Donald Trump’s dirty work: Vainly trying to cover up the Ukrainian cover-up and attacking a Democratic presidential front-runner, Joe Biden, and his son, Hunter.

Ken Frydman, who worked on Rudy Giuliani’s mayoral campaign in 1993, on Giuliani’s defense of the Ukraine scandal: “I think that he is zealously trying to protect his golden goose, the president…Unfortunately, he looks like a right-wing conspiracy nut.”https://t.co/7Y30NvdzRP

Ken Frydman admired Rudolph Giuliani when he worked for him during the 1993 mayoral campaign. “He wasn’t always like this,” Ken says. https://t.co/P0dtd55Qcr