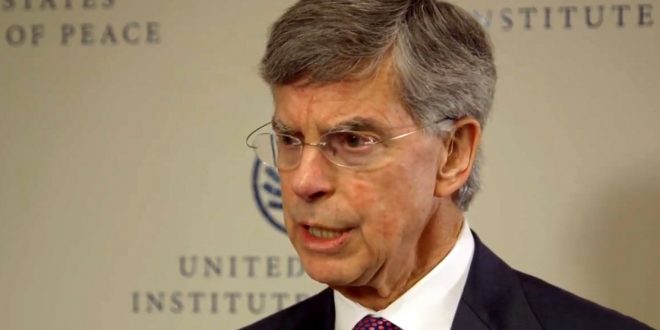 A top diplomat testified Tuesday in the impeachment inquiry into President Donald Trump after House Democrats issued a subpoena to him following State Department attempts to block his appearance, an official working on the probe told NBC News.

His text messages with other administration officials — shared with lawmakers by former U.S. special envoy to Ukraine Kurt Volker as part of the inquiry — have helped fuel suspicions that the Trump administration was trying to arrange a politically motivated quid pro quo with Ukraine.

William B. Taylor Jr., the top diplomat in Ukraine, gave “damning” testimony Tuesday about President Trump and the effort to pressure Ukraine’s government for political gain, according to a Democratic lawmaker and another person familiar with the opening statement Mr. Taylor delivered behind closed doors in the ongoing impeachment inquiry.

“What he said was incredibly damning to the president of the United States,” Representative Ted Lieu, Democrat of California, said after emerging after hours of questioning Tuesday morning. He declined to elaborate further, citing House rules against releasing such testimony.

Mr. Taylor became one of star witnesses in the Democratic impeachment probe after a colleague, Kurt D. Volker, the special envoy to Ukraine, revealed a series of text messages from September in which Mr. Taylor wrote that he thought it was “crazy to withhold security assistance for help with a political campaign.”

New: Per source in the room, Bill Taylor’s opening statement was 15 pages long and prompted “a lot of sighs and gasps.”

Asked how much longer today’s Taylor deposition will go, @RepMarkMeadows tells us: “y’all have plans for the weekend?”

Ambassador Bill Taylor is a graduate of West Point. He served in Vietnam with the 101st Airborne. He is an American patriot. He understands duty, honor, country. https://t.co/aT4YV3ATeR

Taylor said that he and Sondland spoke by phone about why the aid was frozen, and Sondland cited the need for Ukraine to open an investigation among other reasons, according to the sources

Asked about Taylor’s comments, a source familiar with Sondland’s testimony said that Sondland cited, in addition to the investigations, that the aid may have been frozen because the Europeans weren’t giving Ukraine enough and corruption generally.

Amb. Taylor “indicated that he kept extensive notes on all of his correspondence,” Rep. Stephen Lynch says of testimony, without discussing details. “He’s a meticulous public servant.”

Lots of Dems, like Lieu, say Taylor’s testimony was explosive. Rep. Espaillat said this was the most important witness so far. Unanimity among Ds on this point so far.

“All I have to say is in my ten short months in Congress, it’s not even noon and this is my most disturbing day in Congress so far. Very troubling.” – Rep. Andy Levin’s comments after emerging from Bill Taylor’s testimony pic.twitter.com/huOD2j54yR

Previous Collins Ever So Upset At Trump’s “Lynching” Tweet
Next Fox Host: Trump Hasn’t Even “Had A Hint Of Scandal”