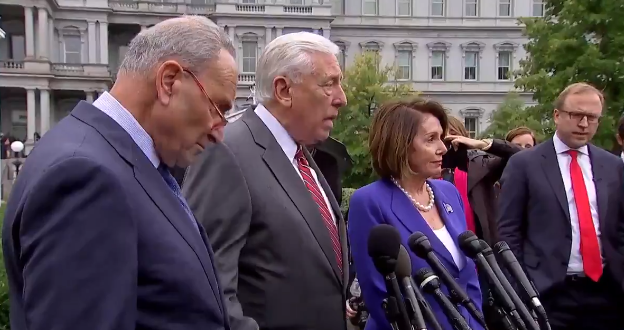 Dems Walk Out On Trump After Hail Of Insults, Pelosi Says To Pray For The President’s Mental Health [VIDEO]

Democratic leaders in Congress on Wednesday angrily walked out of a White House meeting with President Donald Trump after he had a “meltdown,” according to House Speaker Nancy Pelosi. “What we witnessed on the part of the president was a meltdown. Sad to say,” Pelosi told reporters outside the White House with House Majority Leader Steny Hoyer and Senate Minority Leader Chuck Schumer.

The Democratic leaders said that the moment that prompted them to abruptly leave was when Trump called Pelosi “a third-rate politician” to her face.

“He was insulting, particularly to the speaker,” Schumer said. “She kept her cool completely. But he called her a third-rate politician. He said that there are communists involved and you guys might like that. I mean, this was not a dialogue. It was sort of a diatribe — a nasty diatribe not focused on the facts, particularly the fact of how to curtail ISIS, a terrorist organization that aims to hurt the United States in our homeland.”

#BREAKING: Democratic leaders walk out of a meeting with Pres. Trump on Syria after the President began “insulting” Pelosi.

Pelosi: “What we witnessed on the part of the President was a meltdown, sad to say.”

NEW: White House Press Secretary tells me: “The President was measured, factual and decisive, while Speaker Pelosi’s decision to walk out was baffling, but not surprising…While democratic leadership chose to storm out … everyone else in the meeting chose to stay in the room.” pic.twitter.com/eoxZaZ6Nzz

BREAKING: Sen. Schumer says he and other Democratic leaders walked out of meeting with President Trump at White House because the president was “insulting” to Speaker Pelosi during the meeting.

Speaker Pelosi claims that President Trump was “shaken” during the meeting by the House vote today condemning his Syria military withdrawal — a vote that included more than 120 Republicans voting in favor.

WATCH: After meeting with President Trump, Democratic House Majority Leader Hoyer says he has served with 6 presidents and “never have I seen a president treat so disrespectfully a co-equal branch of the government of the United States.” pic.twitter.com/MO376DMjrL

PELOSI on Trump: “I think now we have to pray for his health. Because this was a very serious meltdown on the part of the president.” pic.twitter.com/ckhNSeDmrG