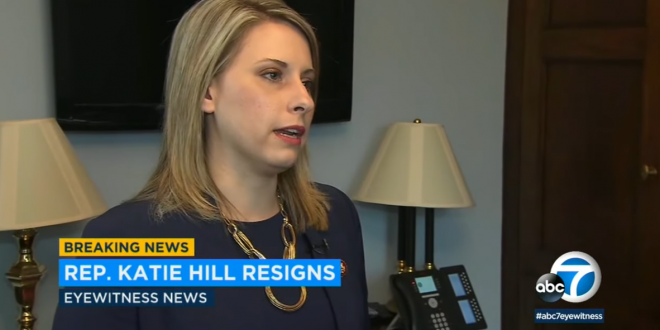 Dem Rep To Resign Amid Allegations Of Affairs [VIDEO]

Freshman Rep. Katie Hill is resigning from Congress after facing allegations of inappropriate sexual relationships with staffers in her office and on her congressional campaign. “It is with a broken heart that today I announce my resignation from Congress. This is the hardest thing I have ever had to do, but I believe it is the best thing for my constituents, my community and our country,” Hill wrote in a letter announcing the news after it was first reported by POLITICO.

Hill’s announcement capped a tumultuous 10-day episode that shook the Democratic Caucus. Hill was a prominent figure in the historic Democratic freshman class, and her resignation was a blow to the colleagues who defended her as the 10-day episode unfolded. Speaker Nancy Pelosi (D-Calif.), who has taken a hard line in sexual harassment cases, said in a statement that Hill had made the right decision in stepping down.

The allegations only came to light after a conservative news site and British tabloid published nude images of Hill without her consent — circumstances that have led many critics to note that Hill is both accused of sexual impropriety and is a victim of sexual exploitation.

Hill herself has acknowledged both aspects of her case, previously saying she knew “even a consensual relationship with a subordinate is inappropriate,” while vowing Sunday to mount a legal fight regarding the leak of intimate photos.

She has accused her “abusive husband,” with whom she is undergoing a contentious divorce, of engaging in a “smear campaign built around cyber exploitation,” saying he enlisted “hateful political operatives” for help. The nude photos were published by the conservative site RedState.org and the Daily Mail.

A president almost twice her age accused by more than 5 dozen women of sexual misconduct still in office and is still assailing women’s rights.

I don’t know who needs to hear this, but Rep. Duncan Hunter *had an affair with one of his Congressional staffers (plus others) and used his campaign funds to pay for his affairs*. He still hasn’t resigned. & AFAICT GOP leaders haven’t asked him to resign. https://t.co/2gJiESrYj7

Previous World Series Fans Chant “LOCK HIM UP” At Trump
Next POLL: 70% Of Millennials Would Vote For A Socialist