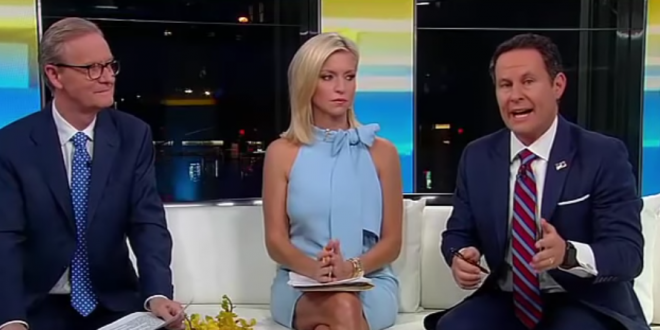 Fox & Friends reacted to the incoming congressional testimony of Lt. Col. Alexander Vindman by making a show of talking about his Ukrainian heritage. As Fox & Friends covered this, Brian Kilmeade noted that Vindman has a purple heart, but then he also noted that he’s “from the Soviet Union. He immigrated here and has an affinity to the Ukrainian people.”

The segment from Fox & Friends comes hours after Fox host Laura Ingraham reacted to Vindman’s words by holding a conversation on her show about Vindman’s Ukrainian heritage. This occurred as she spoke with John Yoo, who floated the possibility of treason by saying “some people might call that espionage” on Vindman’s part.

Fox & Friends is doing a segment on an Army veteran and the “TRUE MEANING OF SACRIFICE” about an hour after smearing a Purple Heart recipient who expressed concerns about Trump pic.twitter.com/AoVv9KteM0

Sean Duffy on CNN on Army Lt. Col. Vindman: “It seems very clear that he is incredibly concerned about Ukrainian defense. I don’t know that he’s concerned about American policy … we all have an affinity to our homeland where we came from … he has an affinity for the Ukraine.” pic.twitter.com/dlsYlTnCwR

Brian Kilmeade on Army Lt. Col. Vindman: “We also know he was born in the Soviet Union, emigrated with his family. Young. He tends to feel simpatico with the Ukraine.” pic.twitter.com/mfjg9NUXSd

Oh my God, look at the spin they are using right now, actually saying that Vindman is a Ukrainian double agent….this is so freaking bananas pic.twitter.com/Oxpju5W23N

*These* two Ukrainian-born Americans on the other hand – totally legit! Trust them all the way. Let them run American foreign policy, after all, they’re paying for it! pic.twitter.com/qYNCp5YpbY