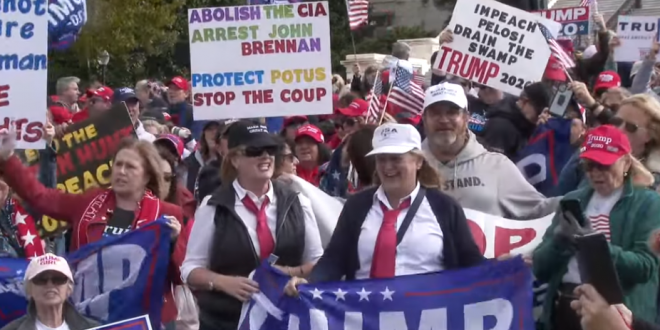 A couple hundred Donald Trump fans rallied outside Congress on Thursday for the “March for Trump,” an event meant to oppose House Democrats’ impeachment investigation. According to organizers, though, there would have been hundreds more people shouting “stop the coup” in Washington’s streets if not for a liberal plot against their buses.

That’s because, as would-be rally attendees gathered across the East Coast for the US Coachways buses that the organizer had promised would take them to Washington, those buses never showed. The no-shows provoked a wave of anger, accusations that the “deep state” had colluded to stop a show of Trump support in Washington, and bad reviews aimed at US Coachways.

But US Coachways has a simpler explanation for what happened—it was never paid for the requested buses due to a series of declined credit card payments. “We want to get people down there,” Joseph Heap, US Coachways’ chief marketing officer, told The Daily Beast. “But unfortunately, payment is required.”

Hit the link for more hilarity.

Today is the day we #MarchforTrump!

While some may be trying to sabotage our efforts, we will not be deterred.

We will #StandWithTrump today wth the US Capitol & push back on this #Coup.

It’s not too late to join us. Come join the #TrumpMarch!

But you can’t drive paying, reserved passengers to DC for a scheduled event to support @realDonaldTrump ? @WomenforTrump @PamelaGeller @diana_west_ @MichelleMalkin @DiamondandSilk. @SCF NEVER use US Coachways, they are unreliable, cowardly scoundrels. https://t.co/814hyBxLF2

US Coachways Cancelled 13 Buses at the LAST MINUTE

For a WOMEN FOR TRUMP MARCH in Washington DC
TODAY

Previous Geraldo: Trump Should Comp The G7’s Rooms At Doral
Next Trump Campaign Claims They Are Suing CNN For Bias