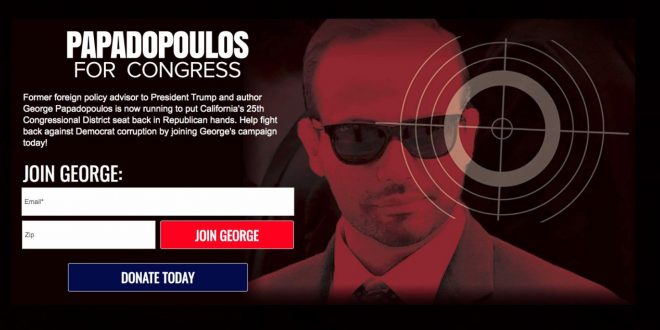 Convicted former Donald Trump advisor George Papadopoulos has filed paperwork to run for Congress in California as a Republican.

By state law, Governor Gavin Newsom has two weeks to issue a proclamation for a special election, and it must take place between 126 and 140 days after his proclamation. A spokesperson for Newsom’s office would not comment on his plans.

While media reports were skeptical about his political plans right out of prison, the former Trump campaign aide might find greater support now, having built his resume and following through media appearances and speaking engagements.

So, this is happening.

George Papadopoulos, who served 14 days in prison for lying to the FBI during the Mueller probe, is running for Katie Hill’s seat in California https://t.co/bfWz0l06OE pic.twitter.com/8F1nLiXAoO

George Papadopoulos already has a campaign website up. https://t.co/Fo8YHaGbIL pic.twitter.com/cpyBmLGEvA