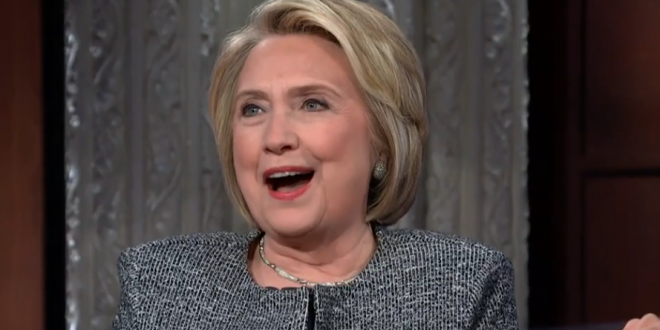 Colbert Audience Chants “Lock Him Up” At Hillary

Hillary Clinton (and her daughter) were on The Late Show with Stephen Colbert last night, which is solid timing with all the bombshell reporting regarding that infamous phone chat involving the presidents of the United States and Ukraine. And a few other folks, apparently.

“How many times, when you were Secretary of State, did you have to say to Barack Obama, ‘You can’t extort foreign countries to get dirt on your political enemies?” Colbert asks Clinton.

“Did you lose count how many times you did that?” After a boisterous laugh, the she replies, “Yeah that never happened.”

“As secretary of state, how would you feel if the president was sending Rudy Giuliani out to actually handle foreign policy?” Colbert asked. “Yeah, that would be a big problem,” Clinton responded.

“Presidents often use, as do secretaries of states, they might use an envoy or a special adviser to deliver a message. But again, it is supposed to be carefully thought through. And from what we’ve seen on television, carefully thinking through is not one of Rudy’s strong points.”

Previous VIRAL VIDEO: Catering Truck Goes Wild At O’Hare
Next Trump May Have Lied To Mueller About Wikileaks