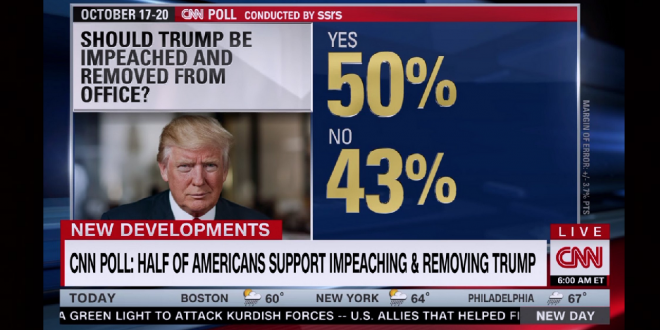 Half of Americans say President Donald Trump should be impeached and removed from office, according to a new CNN poll conducted by SSRS, a new high in CNN polling on the topic and the first time that support for impeachment and removal has significantly outpaced opposition.

As support for impeachment has inched upward, however, Trump’s approval ratings overall and for handling major issues have not taken a hit.

Overall, 41% approve of his handling of the presidency and 57% disapprove, similar to his ratings in early September and August polls conducted before the House of Representatives formally launched an impeachment inquiry in late September.

The percentage of Americans who think Trump should be impeached *and removed* hits a new high of 50 percent. That’s up 8 points since June.

This impeachment polling keeps inching up and I don’t hate to see it. https://t.co/h8ncqESnZj

New CNN poll: Half of Americans say Trump should be impeached and removed from office — marking the first time the poll finds support for impeachment and removal significantly outpacing opposition. https://t.co/pSaemDeNOA