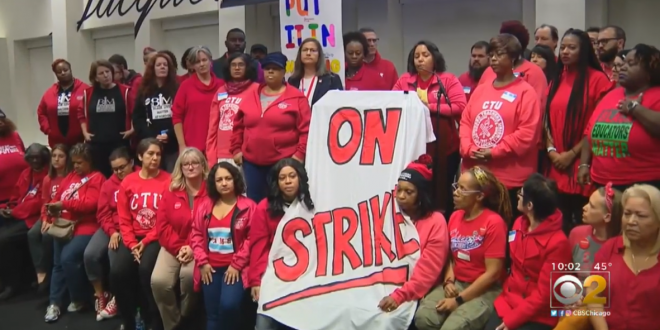 The Chicago Teachers Union is on strike and teachers have joined picket lines at schools across the city this morning after the union’s House of Delegates on Wednesday rejected Mayor Lori Lightfoot and the Chicago Board of Education’s latest proposals. The CTU said it plans to resume contract negotiations with city officials at 9:30 a.m. at Malcolm X College.

Chicago Public Schools announced Wednesday morning that it had canceled classes for Thursday in anticipation of the expected walkout. The union, which has been fighting to gain more influence over the direction of the school system, has rejected the city’s offer of 16% base-pay raises over five years, asking instead for 15% over three years.

But while state law mostly restricts teachers to striking over pay and compensation issues, union leaders have highlighted demands related to staffing, class sizes and prep time. They want nurses, social workers and librarians in every school, and more special education classroom assistants and case managers — and they want all those items in their contract.