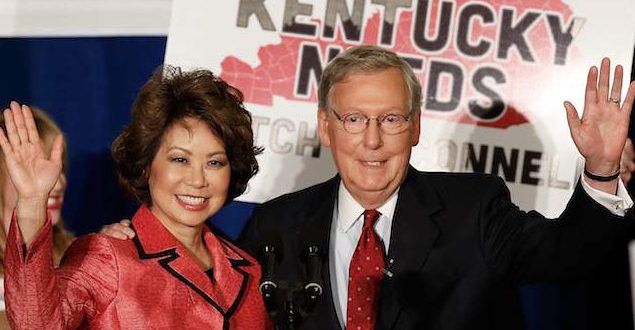 In her first 14 months as Transportation secretary, Elaine Chao met with officials from Kentucky, which her husband Mitch McConnell represents in the Senate, vastly more often than those from any other state.

In all, 25 percent of Chao’s scheduled meetings with local officials of any state from January 2017 to March 2018 were with Kentuckians, who make up only about 1.3 percent of the U.S. population. The next closest were Indiana and Georgia, with 6 percent of meetings each, according to Chao’s calendar records, the only ones that have been made public.

At least five of Chao’s 18 meetings with local Kentuckians were requested in emails from McConnell staffers, who alerted Chao’s staffers which of the officials were “friends” or “loyal supporters,” according to records obtained under the Freedom of Information Act.