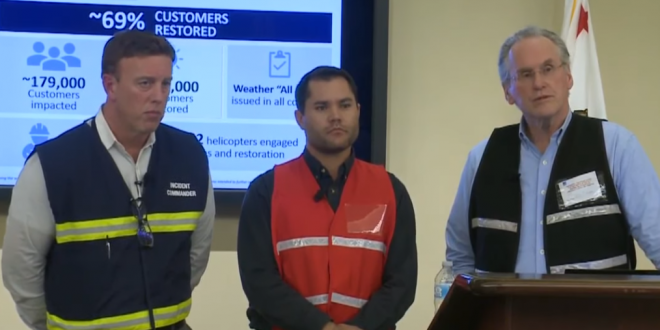 California Utility Admits It May Have Sparked Wildire

California’s biggest utility admitted its electrical equipment may have ignited a ruinous wildfire spreading across the state’s wine country Friday, despite blackouts imposed across the region to prevent blazes. The disclosure came as firefighters simultaneously battled flames in both Northern and Southern California: the fire amid Sonoma County’s vineyards, and a wind-whipped blaze that destroyed homes near Los Angeles.

The power shut-offs were imposed after PG&E electrical equipment was blamed for several blazes in recent years that killed scores of people and burned thousands of homes. However, PG&E said Thursday it didn’t de-energize a 230,000-volt transmission line near Geyserville that malfunctioned minutes before the fire erupted. The company reported finding a “broken jumper” wire on a transmission tower Wednesday night.