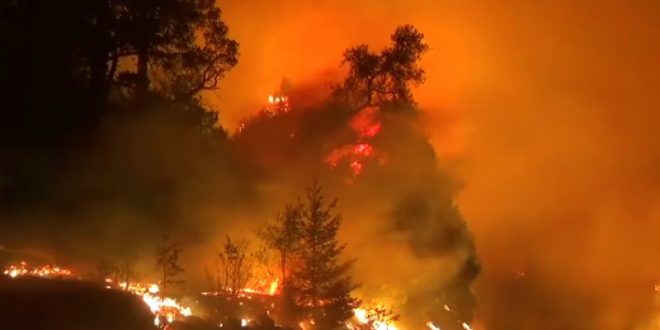 The blaze, called the Hillside Fire, was burning at a rapid rate of spread and quickly expanded to 200 acres by about 2:30 a.m., officials said. Six homes were damaged or destroyed, as were two outbuildings.

Evacuation orders were issued as the fire threatened the North Park neighborhood. Mandatory evacuations were declared in areas for all homes north of 50th Street, west of Highway 18, and east of Mayfield Avenue.

More than 700 firefighters were fighting the Easy Fire Thursday. The fire ignited just before dawn Wednesday, and flames raged into the night, fueled by wind gusts up to 70 mph, CBS News correspondent Carter Evans reports.

It quickly consumed a barn, where volunteers helped rescue animals trapped inside. One horse even seemed to turn back to lead other horses to safety.

Despite an all-out assault, flames still managed to jump a freeway, forcing a nearby neighborhood to evacuate. “We put everything in the car, and I’m so glad we did, ” said Frank Rahimi of Moorpark, “because by the time it jumped the 23 Freeway, we only had seconds to get out.”