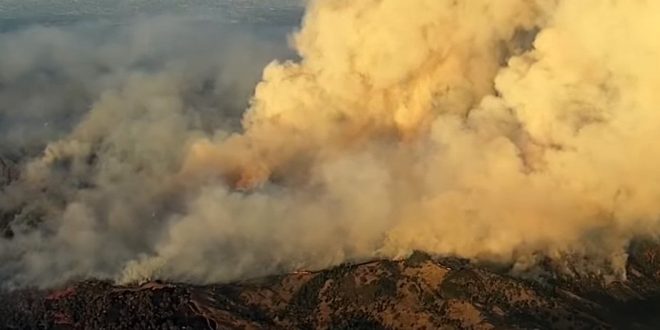 The fire, fueled by winds in the area that topped 93 miles per hour, has already destroyed 79 homes, including at least 31 home, the California Department of Forestry and Fire Protection and the weather service said.

“We’re in a little bit of a defensive position with Mother Nature at the moment,” Cal Fire Division Chief Jonathan Cox said during a press conference Sunday morning, adding that he doesn’t expect to fully contain the fire until Nov. 7.

Peak wind gusts of 93 miles per hour were recorded at about 6 a.m. Sunday morning in the Healdsburg Hills north of the towns of Healdsburg and Windsor — aiding the expansion of the fire and igniting several spot fires as embers blew ahead of the primary blaze.

“It’s the strongest winds that we’ve seen in quite some time,” National Weather Service meteorologist Anna Schneider said. “And the fire has spread quite a bit overnight as a result of those winds.” Bursts of winds up to 85 miles per hour were expected.

The Kincade Fire is just 11% contained after three days and has burned about 26,000 acres. Now, some 180,000 people are being asked to leave their homes in Northern California due to the fire. https://t.co/K9t3OLkS9L