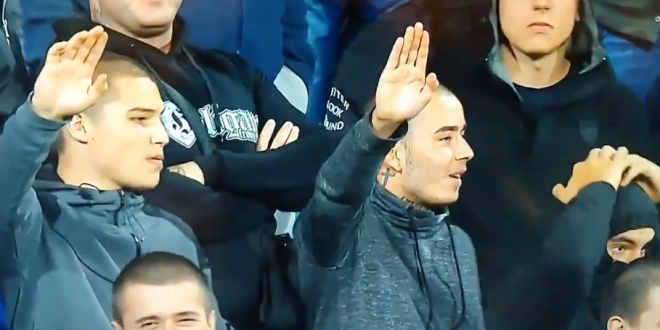 The head of Bulgaria’s football federation resigned Tuesday, bowing to Prime Minister Boyko Borissov’s call for him to quit following a match in Sofia during which Bulgarian fans hurled racist abuse at black England players.

“After yesterday’s shameful loss of the Bulgarian national team and in view of our poor football results, I ordered [Sport] Minister Krasen Kralev to terminate relations with the Bulgarian Football Union, including financial ones, until Borislav Mihaylov resigns,” Borissov said.

“I also strongly condemn the behavior of some at the stadium. It is unacceptable that Bulgaria, which is one of the most tolerant countries in the world, and where people of different ethnicities and religions live in peace, should be associated with racism and xenophobia,” he added.

The racist chanting dominated the headlines in Bulgaria on Tuesday morning. “There’s no light! It’s been buried beneath six goals and tons of shame,” read the headline of the sports website Gong.bg, with the accompanying piece saying: “Bulgarian football and the country as a whole suffered one of the most shameful nights in its entire history – not only was the national team beaten 6-0 by England but the game was twice stopped for racist chants.”

Another sports website, Sportal.bg, went with “Such a shame! A historic humiliation”, while one of the most famous TV pundits in Bulgaria, Borislav Borisov, said: “Every country’s national team is an institution but on Monday night our national team was destroyed. With the way England reacted to the racial abuse they wanted to make a statement – they wanted to stand up against racism and they did it.”

The captain of the Bulgarian team has been praised for pleading with the crowd to stop the abuse. My first post on the incident is here.