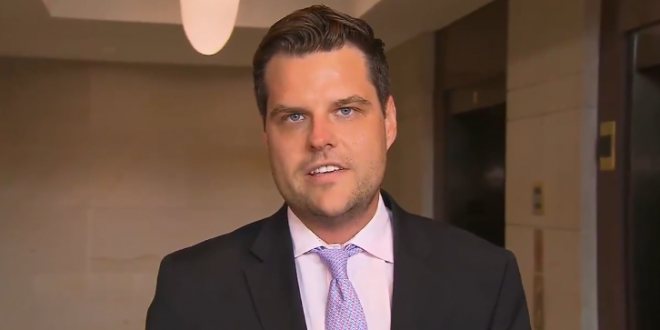 A Republican member of the House Judiciary Committee was ejected from a closed-door impeachment hearing. Rep. Matt Gaetz of Florida tried to enter a hearing Monday in which lawmakers from three different committees are interviewing President Trump’s former top aide on Russia, Fiona Hill.

Gaetz said he believed he should be allowed to attend the hearing because impeachment inquiries traditionally are handled by the House Judiciary Committee, and he serves on that panel.

But the House parliamentarian told Gaetz he is not allowed to attend the hearing because he does not sit on either the Intelligence, Foreign Affairs, or Oversight panels, which are the official committees conducting the impeachment inquiry.

Blocking Members of Congress from attending “impeachment” hearings runs counter to our Democracy.https://t.co/Q8H3xeNzNt

Chairman Schiff and Speaker Pelosi are equally complicit in hiding and obfuscating the truth. Blocking Members of Congress from attending “impeachment” hearings is not only unfair, it runs counter to our Democracy.

Captain Kangaroo fanatic Matt Gaetz was thrown out of the Fiona Hill testimony, because he’s not on any of the three Congressional committees. He then begged the House parliamentarian to let him in. They didn’t. This walking joke needs to educate himself as to how Congress works.

@mattgaetz was attempting to engage in witness tampering and witness intimidation.

Previous STUDY: 21% Of LGBTQs Are Not Registered To Vote
Next Zuckerberg Is Hosting Private Meetings With Cultists