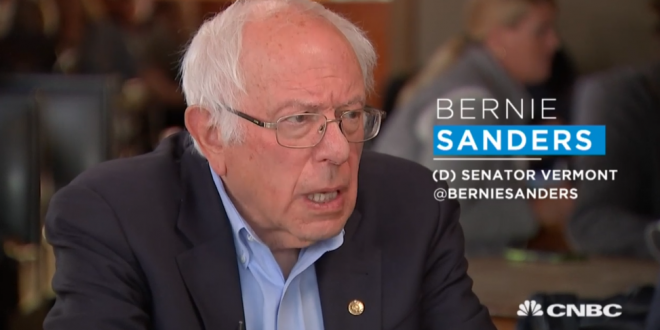 Bernie Sanders said he will not release a plan to pay for his Medicare for All proposal. In an interview broadcast Tuesday, CNBC’s John Harwood noted that Sen. Elizabeth Warren is “producing plans,” including one to pay for Medicare for All. “You’ve identified revenue sources for about half of it,” Harwood said to the Vermont senator.

“Do you think it’s important to identify revenue sources for the other half?” Sanders replied: “The fight right now is to get the American people to understand that we’re spending twice as much per capita, that of course, we can pay for it. We’re paying it now in a very reactionary, regressive way. I want to pay for it in a progressive way.”

He added: “You’re asking me to come up with an exact detailed plan of how every American—how much you’re going to pay more in taxes, how much I’m going to pay. I don’t think I have to do that right now.”