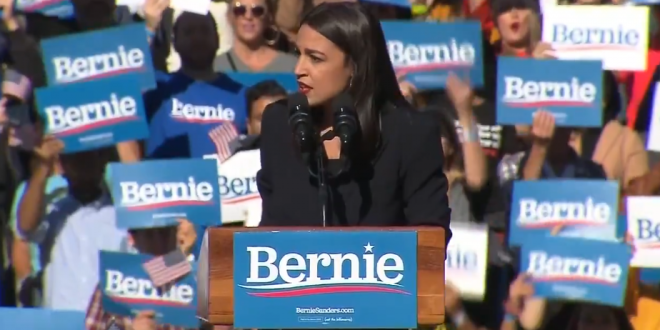 Alexandria Ocasio-Cortez, the New York Democrat who was elected as the youngest women to serve in Congress during the 2018 midterms, has endorsed Bernie Sanders to become the next president of the United States.

Speaking at a massive rally in Queens, the congresswoman celebrated Mr Sanders’ lifelong career in public service and progressive track record as a Vermont senator. “We right now have one of the best Democratic presidential primary fields in a generation and much of that is because of Bernie Sanders,” she said.

The congresswoman hailed Mr Sanders “enormous, consistent and nonstop advocacy” in the Senate, saying: “The halls of Congress are no joke. It is no joke to stand up to corporate power and established interest.”

We need a new vision for America. That is what this campaign is all about. I’m so grateful that @AOC, who has become an inspiration to millions of young people, is with us in this fight. #BerniesBack pic.twitter.com/D66KSZIRch

Rep. @AOC: “When I was a waitress and when it was time for me to graduate college with student debt, Bernie Sanders was one of the only ones that said no person should be graduating with life-crushing debt at the start of their lives.” pic.twitter.com/MItPWKDR6s

The Trump protestors have come to the AOC/Bernie rally pic.twitter.com/rVvhmpqEKx