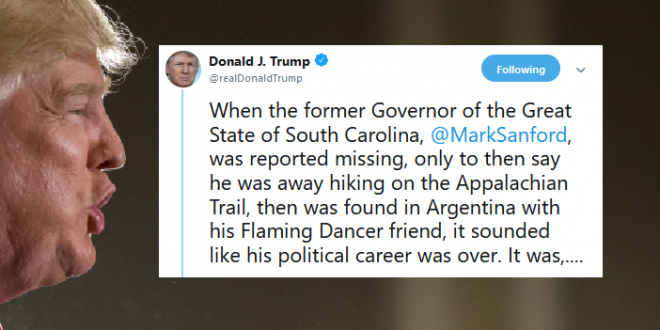 Trump has also been accused of having affairs, notably with adult-film star Stormy Daniels. Sanford, Weld and Walsh will face a president who has continued to receive support from most Republicans. A recent Morning Consult poll found that 85 percent of them approved of Trump.

When the former Governor of the Great State of South Carolina, @MarkSanford, was reported missing, only to then say he was away hiking on the Appalachian Trail, then was found in Argentina with his Flaming Dancer friend, it sounded like his political career was over. It was,….

…but then he ran for Congress and won, only to lose his re-elect after I Tweeted my endorsement, on Election Day, for his opponent. But now take heart, he is back, and running for President of the United States. The Three Stooges, all badly failed candidates, will give it a go!

When Donald Trump was caught on tape bragging about gabbing women’s genitalia – it sounded like his political career was over. But his worshipers hated brown people so much, they didn’t let a small thing like that interfere.