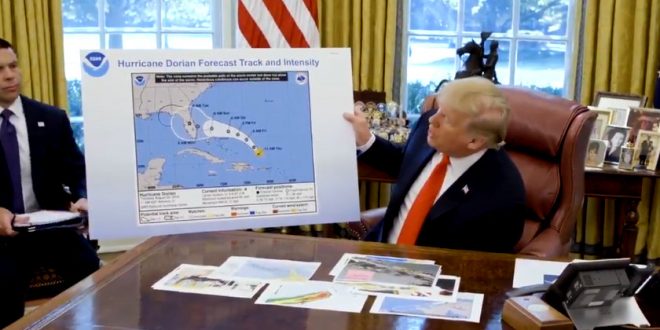 WH Official: It Was Trump Himself Who Drew On Map

He posted nine tweets and five maps about Alabama and the big storm. He defended a doctored hurricane map that had been altered with a black Sharpie to include the state. And he had his White House release a 225-word statement defending his erroneous warnings that Alabama was “going to get a piece” of the storm.

Trump’s fixation on his erroneous Dorian warnings underscores a long history of defending inaccurate claims — from the crowd size at his inaugural address to false claims of voter fraud in 2016 to fictional “unknown Middle Easterners” streaming across the southern border in migrant caravans.

It was Trump who used a black Sharpie to mark up an official National Oceanic and Atmospheric Administration map, which he displayed during an Oval Office briefing on Wednesday, according to a White House official who spoke on the condition of anonymity to discuss internal deliberations.

Was there ever any doubt?