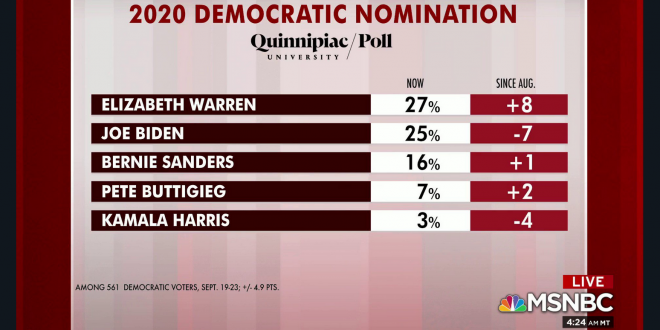 Democratic voters polled by Quinnipiac University gave Warren 27 percent of the vote and Biden 25 percent. The numbers are within the margin of error of plus or minus 2.3 percentage points, putting the two candidates in an essential tie, poll officials said.

Wednesday’s poll is the first time that a candidate other than Biden has had the numerical lead in the primary since the question began being asked in March, poll officials added.

With the latest Quinnipiac poll showing Warren in the lead expect some to say she is not electable against Trump. I didn’t buy it then, now and I won’t in 2020. Trump is vulnerable and the leading Democratic candidates can all beat him. She is leading because she is electable.

Previous Juul Shakeup: CEO Out, Merger Off, All Ads Canceled
Next Christian Site: Holograms Could Bring The Antichrist