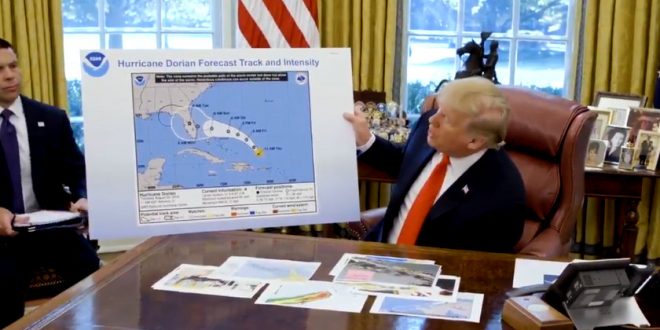 President Donald Trump has been widely mocked after he displayed a map showing Hurricane Dorian’s projected path in the Oval Office which appeared to have been altered with a marker pen to falsely show it was expected to hit Alabama. Thousands of people have tweeted using the #Sharpiegate hashtag (alluding to the famous marker pen brand) following the bizarre moment in the White House in which Trump attempted to pass off a doctored map showing Dorian’s projection to back up his previous claims that Alabama could be affected by the powerful storm.

trump releases pic to prove that fake news was lying about him him not liking tiffany #sharpiegate pic.twitter.com/7pcQLWqASQ

What the #Sharpiegate video didn’t show was Trump revealing his new laws he calls the Trump Commandments. Definitely not written with a Sharpie, he claims. pic.twitter.com/Fqy5WHc304

Why’s everybody getting so mad about this #sharpiegate thing? pic.twitter.com/kHe6m3aOYT

#sharpiegate Mexico is paying for the wall. pic.twitter.com/r2sYa0CYnc

Previous Dorian Hits Category 3 Again As South Carolina Braces
Next Fox & Friends: Trump “Never Should Have” Run On Promise That Mexico Would Pay For The Wall [VIDEO]