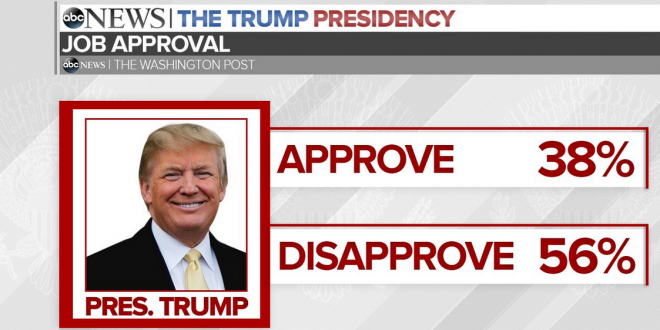 The survey also found that 46 percent of Americans approve of Trump’s handling of the economy and only 35 percent approve of his performance of trade negotiations with China.

Among those who believe a recession is likely, Trump’s approval rating is just 20 percent, based on the poll. With Republicans generally, Trump still maintains high levels of approval, though it dropped from 5 points to 82 percent after his peak at 87 percent in July.

BREAKING: Pres. Trump has a 38% approval rating, down from a career-high of 44% in July, new @ABC News/Washington Post poll finds; 56% disapprove. https://t.co/qgFEXrG08u pic.twitter.com/Cx4jfjwNUm