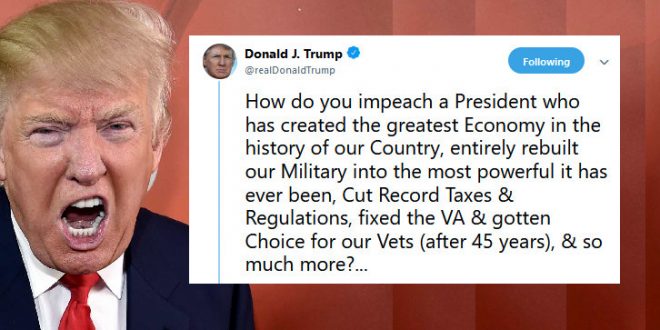 Trump: You Can’t Impeach Me, I’m Much Too Fabulous

Donald Trump is not the first American president staring down impeachment to nurse a deep sense of persecution and self-pity. But he is the first to broadcast that mentality to the world.

Trump has been determined to cast himself as a singular victim in a warped reality – a portrayal that seems part political survival strategy, part virtual therapy session.

As Trump tells it, he is a hardworking and honorable president whose conduct has been “perfect” but who is being harassed and tormented by “Do Nothing Democrat Savages” and a corrupt intelligence community resolved to perpetuate a hoax, defraud the public and, ultimately, undo the 2016 election.

How do you impeach a President who has created the greatest Economy in the history of our Country, entirely rebuilt our Military into the most powerful it has ever been, Cut Record Taxes & Regulations, fixed the VA & gotten Choice for our Vets (after 45 years), & so much more?…

….The conversation with the new and very good Ukraine President, who told the Fake News, at the United Nations, that HE WAS NOT PRESSURED BY ME IN ANY WAY, SHAPE, OR FORM, should by and of itself bring an end to the new and most recent Witch Hunt. Others ended in ashes!

Previous Mick Mulvaney May Be First To Exit Post-Whistleblower
Next CHATTER AWAY: Overnight Open Thread