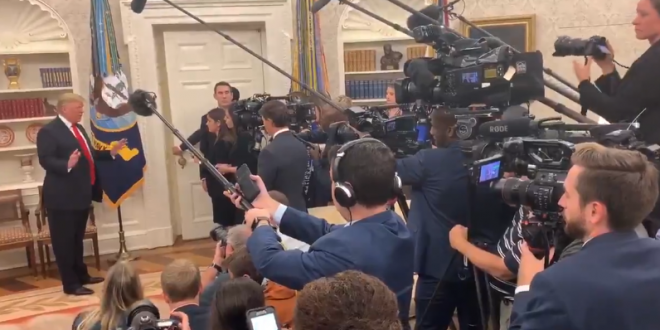 President Trump said Monday that the White House is “trying to find out” the identity of the intelligence community whistleblower who filed a complaint about the president’s interaction with Ukraine.

“We’re trying to find out about a whistleblower,” Trump told reporters in the Oval Office when asked if he knows the person’s identity, alleging that they reported “things that are incorrect.”

The legal team representing the whistleblower whose claims sparked the impeachment inquiry and President Donald Trump’s ire is expressing “serious concerns” for their client’s personal safety, according to a letter sent to acting Director of National Intelligence Joseph Maguire.

Andrew Bakaj, an attorney for the whistleblower, writes that “the events of the past week have heightened our concerns that our client’s identity will be disclosed publicly and that, as a result, our client will be put in harm’s way.” Bakaj also claimed that “certain individuals have issued a $50,000 “bounty” for “any information” relating to our client’s identity.”

“The current environment is one that requires sensitivity and intelligence about security and there are ongoing discussions about how to best to prepare for worst-case scenarios,” a source close to the case told ABC News.

Q Do you know who the whistleblower is?

TRUMP: “Well we’re trying to find out about a whistleblower. We have a whistleblower that reports that things that were incorrect.” pic.twitter.com/jKX1J87wrg

Mark Warner says “any rational person would be concerned about the whistleblower’s safety after the president’s comments,” calling Trump’s attacks “outrageous” that will have a “chilling effect.”

The Senate Intel Committee, he said, is starting to map out potential witnesses pic.twitter.com/KMb2ymtxFt

Trump, leaving behind the VP and the Scalia family to talk to the press. pic.twitter.com/NmBTPLSnqP