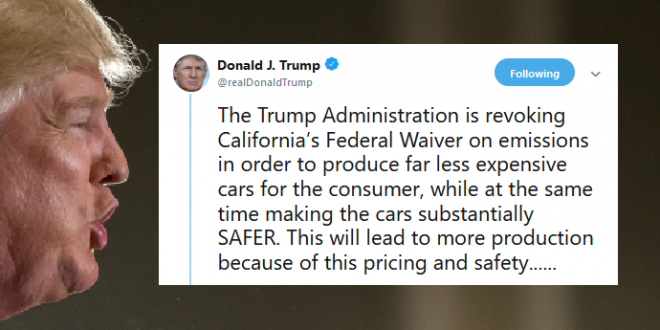 President Donald Trump said Wednesday that his administration is barring California from setting its own auto emissions standards, setting up a fresh struggle over the president’s push to unravel restrictions on businesses.

In tweets announcing the move, the president said the White House “is revoking” a federal waiver that allowed the state to craft its own rules on greenhouse gas emissions from vehicles.

He also claimed “there will be very little difference in emissions” under federal rules his administration plans to outline than under standards California agreed to with automakers.

Already, 13 states and the District of Columbia have vowed to adopt California’s standards if they diverge from the federal government’s, as have several major automakers. California leaders on Tuesday said they will fight any challenge to their autonomy.

“While the White House has abdicated its responsibility to the rest of the world on cutting emissions and fighting global warming, California has stepped up,” Gov. Gavin Newsom (D) said. “It’s a move that could have devastating consequences for our kids’ health and the air we breathe, if California were to roll over. But we will not.”

Echoing the governor, state Attorney General Xavier Becerra, who has sued the Trump administration on a range of issues, vowed to head back to court, saying California’s clean car standards are “achievable, science-based, and a boon for hard-working American families and public health.”

The Trump Administration is revoking California’s Federal Waiver on emissions in order to produce far less expensive cars for the consumer, while at the same time making the cars substantially SAFER. This will lead to more production because of this pricing and safety……

…. advantage, and also due to the fact that older, highly polluting cars, will be replaced by new, extremely environmentally friendly cars. There will be very little difference in emissions between the California Standard and the new U.S. Standard, but the cars will be….

….far safer and much less expensive. Many more cars will be produced under the new and uniform standard, meaning significantly more JOBS, JOBS, JOBS! Automakers should seize this opportunity because without this alternative to California, you will be out of business.