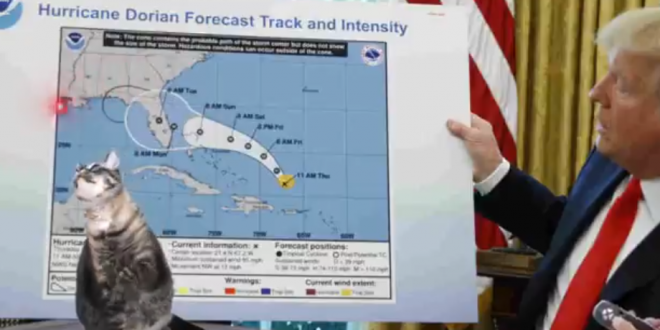 In between tweeting about secret Taliban meetings and James Comey, Donald Trump confused just about everyone last night by sharing a meme about his Hurricane Dorian forecast.

The president reignited the controversy when he tweeted an edited video that shows Trump shining a laser pointer while a cat (tagged as CNN) follows the pointer’s red dot as the Benny Hill theme tune plays in the background.

That is an actual tweet from the president of the United States. It’s easy to normalise a lot of Trump’s behaviour, but at least this example stood out as being notably surreal. It’s unclear how he found the video but it seems to have come from a Twitter user who repeatedly tweets pro-Trump memes at the president.

For those unaware, some cultists have long boasted that Trump lies just so he can enjoy watching the media chase the lies like a cat chases a laser pointer.

I just want to go back in time and show every status quo custodian who claimed Trump would be reined in by experts and adults in the room this video he retweeted after midnight of a cat chasing a laser pointer on a hurricane map he altered with a Sharpie.

Trump announced in the last few hours he has decided to cancel his meeting with the Taliban at Camp David just days before 9/11. He has now moved on to tweeting a video of a cat on his desk with a laser pointer. He isn’t losing it. He has lost it.

Previous Gabbard: Impeachment Would Only Tear US Apart
Next BRITAIN: Johnson Cabinet Member Quits Over Brexit