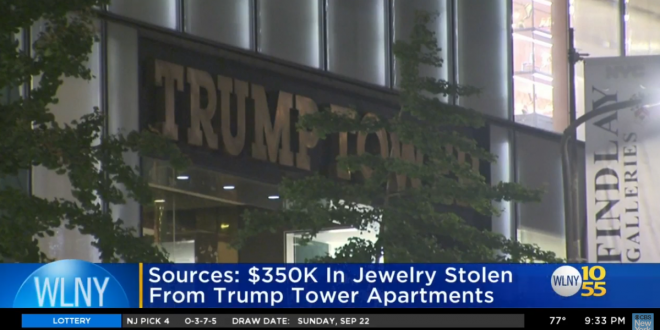 Detectives are investigating reports of heists of about $350,000 worth of jewelry from residents in Manhattan’s Trump Tower. The jewelry was allegedly swiped from two apartments in the building where President Trump owns a penthouse triplex, police said. A 33-year-old woman told police her $117,000 Graff diamond bracelet was taken from her 59th floor apartment after she left for vacation on Sept. 3.

Also, a 67-year-old woman reported that five pieces worth a total of $236,00 were stolen from a drawer in a closet in her 42nd floor apartment, police said. The items reportedly disappeared between June 21 and Sept. 9. They were a Harry Winston diamond bracelet, a ring, necklace and bracelet – all encrusted with diamonds and sapphires – and a pair of diamond and emerald earrings. Both incidents are thought to have been inside jobs.

Previous Giuliani On Whether Trump Threatened To Cut Off Aid To Ukraine: I Can’t Say With 100% Certainty He Didn’t
Next Former Gov. William Weld: Trump Committed Treason, Pure And Simple, Cart Him Off To Save Us All [VIDEO]