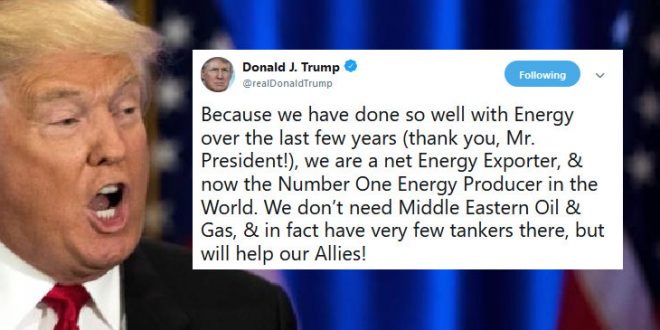 Trump Thanks Himself For Obama’s Energy Gains

Donald Trump has been warned he cannot declare war without congressional support following the bombing of Saudi Arabian oil facilities. The strikes, which destroyed half of the kingdom’s oil production capacity, were claimed by Iran-backed Houthi rebels in Yemen. On Sunday night Mr Trump said the US was “locked and loaded” and believed it knew who was truly behind the attack.

But Bernie Sanders, who is gunning for the Democratic nomination for president, tweeted: “Mr. Trump, the Constitution of the United States is perfectly clear. Only Congress—not the president—can declare war. And Congress will not give you the authority to start another disastrous war in the Middle East just because the brutal Saudi dictatorship told you to.” It came hours before Mr Trump was due to hold a rally in New Mexico, a state he lost in 2016.

Because we have done so well with Energy over the last few years (thank you, Mr. President!), we are a net Energy Exporter, & now the Number One Energy Producer in the World. We don’t need Middle Eastern Oil & Gas, & in fact have very few tankers there, but will help our Allies!

Saudi Arabia oil supply was attacked. There is reason to believe that we know the culprit, are locked and loaded depending on verification, but are waiting to hear from the Kingdom as to who they believe was the cause of this attack, and under what terms we would proceed!

The US did not become the #1 energy producer because of Trump; it happened under Obama in 2012.

US is not a net energy exporter; the EIA predicts it will happen by next year.

US imported 30 million barrels per month from the Gulf as of June; that number has fallen under Trump. pic.twitter.com/L4gJ4z3UEO