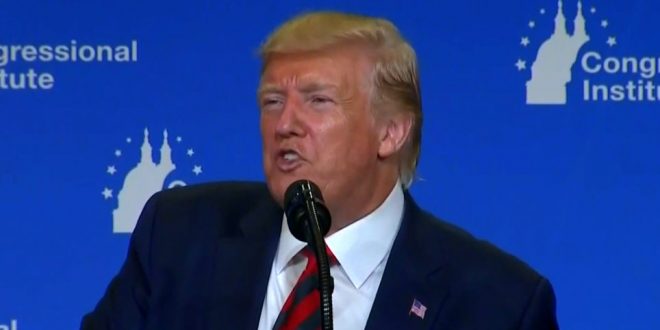 After his administration rolled-back Obama-era energy efficiency rules for light bulbs, President Donald Trump complained that the environmentally-friendly lamps make him look orange because the light they emit is “no good.”

Trump’s face has an orange glow, the source of which is unknown. A White House official told The New York Times the strange and seemingly-permanent hue is down to “good genes,” though many people believe he uses fake tan.

“The light bulb. People said what’s with the light bulb? I said here’s the story,” Trump told the GOP House Retreat Dinner on Thursday night. “And I looked at it, the bulb that we’re being forced to use, number one to me, most importantly, the light’s no good. I always look orange. And so do you. The light is the worst.”

! Trump on his decision to weaken energy efficiency rules for light bulbs: “I’m not a vain person…But I look better under an incandescent light than these crazy lights that are beaming down.”

Trump says he’s bringing back Edison-era incandescent light bulbs because with modern, energy-efficient lighting, “The light’s no good—I always look orange.”
In fact, the reason for Trump’s orange pallor is:

Previous O’Rourke Calls FBI After Death Threat From GOP Rep
Next Ivanka Trump: I Got My Moral Compass From My Father