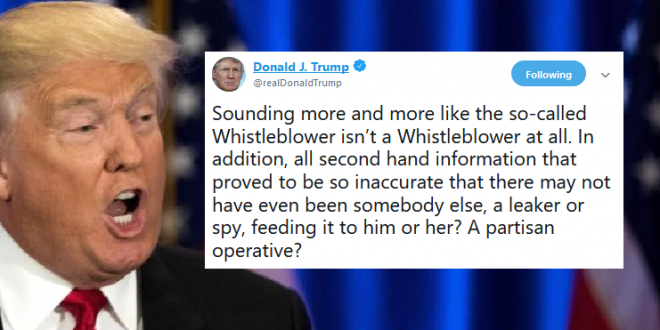 Trump Suggests “Spy” May Be Behind Whistleblower

Trump has now jumped from the argument that the whistleblower complaint represented “secondhand information,” as he first argued yesterday, to claiming that the information may have been entirely fabricated.

The whistleblower said this in his complaint to explain how he obtained his information: “In the course of my official duties, I have received information from multiple U.S. Government officials that the President of the United States is using the power of his office to solicit interference from a foreign country in the 2020 U.S. election.”

Trump’s tweet alleging (without evidence) that the whistleblower fabricated his sources could raise concerns about the president protecting the person’s identity, as a CNBC reporter pointed out.

Sounding more and more like the so-called Whistleblower isn’t a Whistleblower at all. In addition, all second hand information that proved to be so inaccurate that there may not have even been somebody else, a leaker or spy, feeding it to him or her? A partisan operative?

This raises an important question: does the president believe he has the authority to name this person publicly, or does he agree the person is entitled to whistleblower protection under the law? https://t.co/XM5vcwv5sN

The picture of a man who just lured Democrats into his impeachment trap pic.twitter.com/Xp789f3nkz