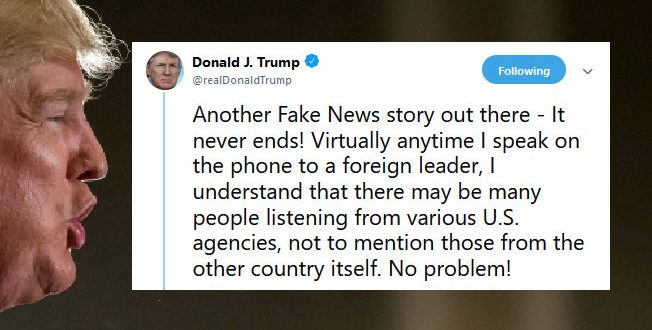 The Post reported Wednesday that a U.S. intelligence official filed a whistleblower complaint with the inspector general for the intelligence community, claiming Trump made a troubling “promise” to a foreign leader, whose name was not disclosed.

Intelligence Community Inspector General Michael Atkinson reportedly found the complaint to be credible and considered it a matter of “urgent concern.” But Acting Director of National Intelligence Joseph Maguire has so far refused to share details of the complaint with Congress,

Another Fake News story out there – It never ends! Virtually anytime I speak on the phone to a foreign leader, I understand that there may be many people listening from various U.S. agencies, not to mention those from the other country itself. No problem!

….Knowing all of this, is anybody dumb enough to believe that I would say something inappropriate with a foreign leader while on such a potentially “heavily populated” call. I would only do what is right anyway, and only do good for the USA!