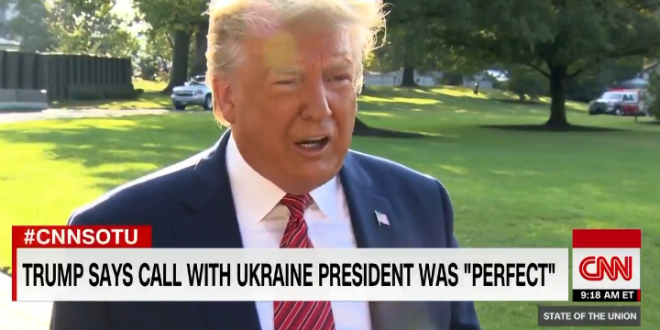 Trump: My Ukraine Call Was A “Perfect Conversation”

President Trump on Sunday went on the offensive against Democratic presidential candidate Joe Biden and the whistleblower who reportedly raised concerns about the president’s interaction with a foreign leader said to be the president of Ukraine. Speaking to reporters outside the White House, Trump again defended his conduct during the call with Ukraine. He denied that there was a quid pro quo involved in the talks with the Ukrainian president, calling it a “perfect conversation.”

“It was largely the fact that we don’t want our people, like Vice President Biden and his son, creating to the corruption already in the Ukraine,” Trump said as he left for an event in Texas. “I’m not looking to hurt Biden… but he said a very bad thing. He said a very foolish thing,” Trump added.  He went on to criticize the whistleblower that set off the controversy, saying the official had caused a “false alarm.”

“The real story involves Hunter Biden going around the world and collecting large payments from foreign governments and foreign oligarchs.” Peter Schweizer Laura Ingraham Hunter made a fortune in Ukraine and in China. He knew nothing about Energy, or anything else.

President Trump on the call with the Ukraine president: “My conversation with the president, the new president of Ukraine, was perfect. … It was a perfect conversation” #CNNSOTU pic.twitter.com/uFLoPo7NtA

Step one: Deny the reports while arguing that even if true, there is nothing wrong with what was done.