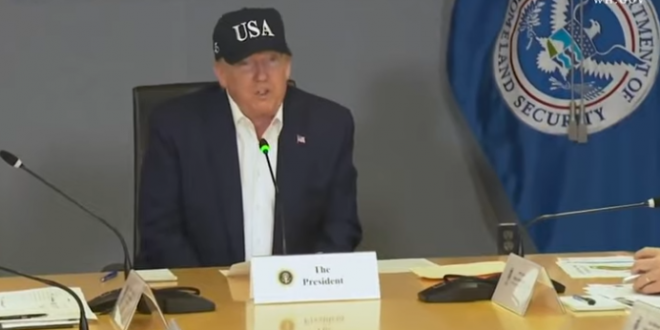 During a briefing on the category 5 Hurricane Dorian sweeping across the Bahamas and toward the US coast, Donald Trump said: “All we know is that it’s possibly the biggest. I’m not sure I’ve even heard of a category 5, I knew it existed. And I’ve seen some category 4s. I don’t even think I’ve heard the term other than I know it it’s there and it’s the ultimate and that’s what we have unfortunately.” Trump has said the same thing – that he has never heard of category 5 hurricanes – at least four times over the last two years, including as recently as May.

President Donald Trump on the existence of Category 5 hurricanes, 2017-2019. pic.twitter.com/IRRny20hfp

This is the fourth Category 5 hurricane to strike the United States during his presidency. Irma, Maria, Michael, Dorian. pic.twitter.com/xWLYuQRTBU

“A category 5 is something that, I don’t know if I’ve ever even heard the term”

And another surveying the damage in Florida

Michael was a Category 5 storm pic.twitter.com/UCzxXEbEFy

Previous CHATTER AWAY: Overnight Open Thread
Next Dorian Stalls Over The Bahamas, US Evacuations Begin