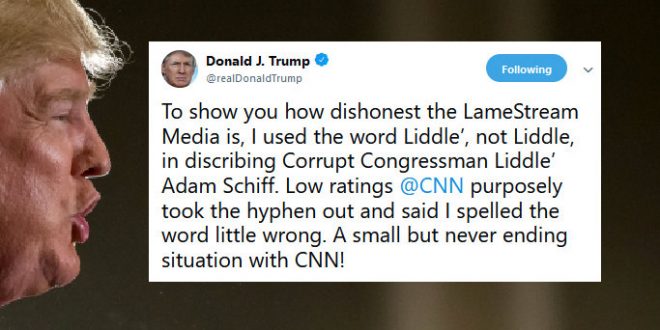 It seems that CNN claimed that Trump misspelled “little” as “liddle.” The word “liddle” however, is not a word found in any reputable dictionary, though the Commander in Chief is clearly using a unique spelling on purpose, as he has used that term before.

The other problem for Trump is that CNN did not accurately cite the use of an apostrophe he used at the end of his made up word, though perhaps, unfortunately, he misidentified the punctuation mark that is missing. It is not a “hyphen” as he alleges, it is an apostrophe.

To show you how dishonest the LameStream Media is, I used the word Liddle’, not Liddle, in discribing Corrupt Congressman Liddle’ Adam Schiff. Low ratings @CNN purposely took the hyphen out and said I spelled the word little wrong. A small but never ending situation with CNN!

You’re a dumbfuck who cannot spell tap, quote, little, and a lot of other 3-6 letter words. Fuck you.

You used an apostrophe, not a hyphen, you fucking idiot.

You do realize that with or without the ‘hyphen’ you still sound like a juvenile moron sociopath who’s unfit for the job, right? #Trump

Seems like this is the liddlest of your concerns Bubbles.

Trump slams CNN for reporting he misspelled a word while in his very tweet calling that out he misspells the word “describing” as “discribing.”#GameSetMatch

What the hell are you talking about?

Previous Giuliani: I Should Get Some Kind Of Reward [VIDEO]
Next Pence Publicly Claims Transcript “Completely Vindicates” Trump But Had Earlier Warned Him Not To Release It