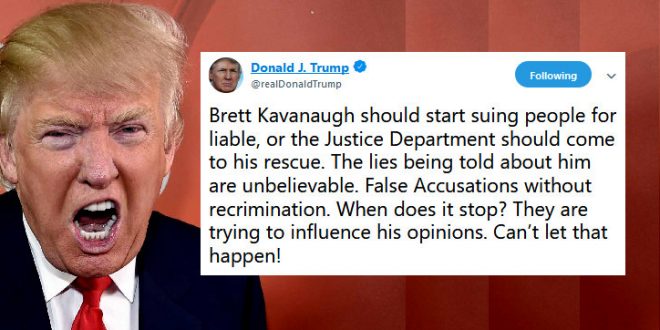 President Trump in an early morning tweet on Sunday said “Radical left Democrats” and the “LameStream Media” want to scare Supreme Court Justice Brett Kavanaugh into “turning Liberal.” The president’s tweet came after The New York Times reported that a male former classmate said he witnessed Kavanaugh expose himself and press his genitals against a woman without her consent.

The latest allegation, which had not been made public, was reported to the FBI during Kavanaugh’s Supreme Court confirmation process last year but was not investigated by the FBI, according to the Times. The justice was confirmed after a tumultuous confirmation process that included emotional testimony from both Kavanaugh and Christine Blasey Ford, who accused him of sexual misconduct.

Brett Kavanaugh should start suing people for liable, or the Justice Department should come to his rescue. The lies being told about him are unbelievable. False Accusations without recrimination. When does it stop? They are trying to influence his opinions. Can’t let that happen!

Now the Radical Left Democrats and their Partner, the LameStream Media, are after Brett Kavanaugh again, talking loudly of their favorite word, impeachment. He is an innocent man who has been treated HORRIBLY. Such lies about him. They want to scare him into turning Liberal!

Previous Holder: Trump Could Face Trial After Leaving Office
Next Boris Johnson Compares Himself To The Incredible Hulk