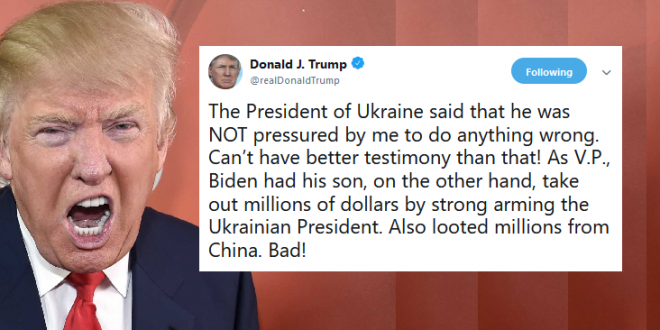 The president says Hunter Biden “walked out of China with $1.5 billion in a fund” and earned “millions” of dollars from the deal. There is no evidence to support those claims.

One could argue Hunter Biden has been trading off his father’s name, and certainly arranging a handshake between a business partner and the vice president in China raises eyebrows.

But Hunter Biden did not raise money for the fund; instead, he was on a board that advised potential investors. He did not obtain an equity stake until after his father was no longer vice president — and that investment of less than half a million dollars has not yet yielded a payoff for Hunter Biden, according to his attorney.

The President of Ukraine said that he was NOT pressured by me to do anything wrong. Can’t have better testimony than that! As V.P., Biden had his son, on the other hand, take out millions of dollars by strong arming the Ukrainian President. Also looted millions from China. Bad!

Will be a GREAT and very accurate show tonight by @seanhannity on @foxnews (9:00 PM). Will play my full statement from Air Force One!

Previous Man Who Called For Impeaching Obama Says That If You Want To Remove Trump, Try Winning An Election
Next CHATTER AWAY: Overnight Open Thread