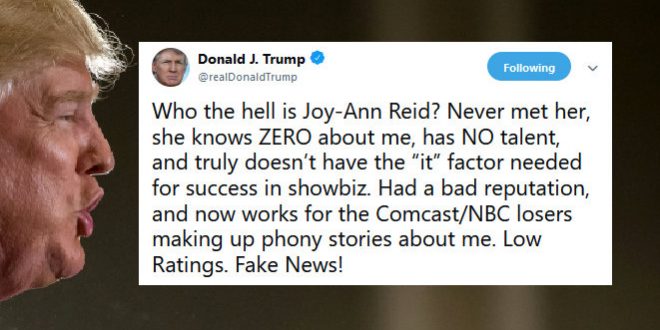 Minutes after he “quoted” nobody in particular to again call himself a “Very Stable Genius,” Trump this morning attacked MSNBC host Joy Reid, who he has never heard of but definitely has no talent, low ratings, and is fake news.

At this writing it’s not yet clear what prompted this rant and Reid’s Saturday morning show doesn’t start until 10AM.

Meanwhile, Glorious Leader would like you to know that his 98% approval rating from Republicans is a correct and “very beautiful number.”

“A Very Stable Genius!” Thank you.

Who the hell is Joy-Ann Reid? Never met her, she knows ZERO about me, has NO talent, and truly doesn’t have the “it” factor needed for success in showbiz. Had a bad reputation, and now works for the Comcast/NBC losers making up phony stories about me. Low Ratings. Fake News!

94% Approval Rating in the Republican Party! Tuesday night in the Great State of North Carolina proved that high and very beautiful number correct.