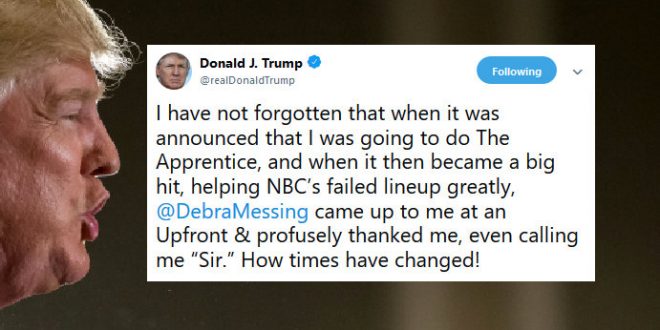 President Trump tore into actress Debra Messing in a Sunday tweet after the “Will and Grace” star called for outing those who ​show up for the president’s​ big-money fundraiser ​later this month in ​Beverly Hills.

Messing and her NBC co-star Eric McCormack ​said they would shame the Trump supporters in Hollywood who attend the fundraiser, where tickets could go for as much as $100,000 a couple.

The political soiree will be held on Sept. 17 – in the middle of Emmy Week in Hollywood – and will be hosted by Republican National Committee chairwoman Ronna McDaniel, RNC co-chairman Tommy Hicks Jr., campaign manager Brad Parscale and Trump Victory finance chairman Todd Ricketts.

I have not forgotten that when it was announced that I was going to do The Apprentice, and when it then became a big hit, helping NBC’s failed lineup greatly, @DebraMessing came up to me at an Upfront & profusely thanked me, even calling me “Sir.” How times have changed!

Please print a list of all attendees please. The public has a right to know. https://t.co/YV4UoxrPHI

Hey, @THR, kindly report on everyone attending this event, so the rest of us can be clear about who we don’t wanna work with. Thx. https://t.co/7W3xPG3bI2

Two notes: 1) Like crying, Profuse Thanking often goes along with Sir. In this story, Debra Messing has taken the place of the big burly coal miner backstage. 2) This is a special Sir Story. Trump almost never explicitly notes the Sir. He usually just sneaks it in.

There is no mass shooting, no hurricane, no national tragedy that will ever hurt Donald Trump the way a slight by a famous person does.

Split screen. In Poland, VP Mike Pence just finished speech marking anniversary of start of World War II. Mentioned the "unspeakable evil of the Holocaust." Back home, Pres Trump, who skipped the trip and sent Pence in his stead, just tweeted about popularity of "The Apprentice"