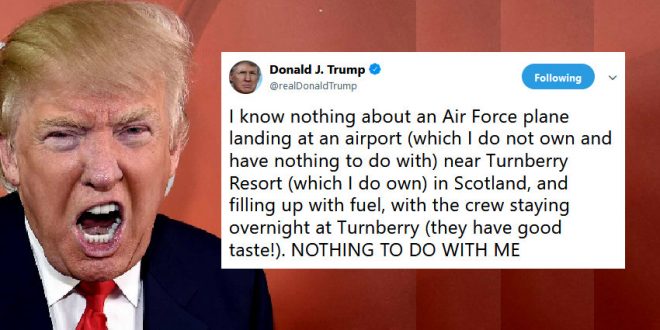 Trump: Air Force Has “Good Taste” To Stay At My Resort

Donald Trump has denied knowledge of US Air Force crew allegedly using Prestwick Airport to refuel – and says they have “good taste” for staying at his Turnberry resort. The President tweeted today amid a government probe which claims the military has spent $11 million on fuel at the Scots airport. It’s also been claimed five military crew stayed at the President’s plush Ayrshire golf hotel back in Europe during a trip to the Middle East.

I know nothing about an Air Force plane landing at an airport (which I do not own and have nothing to do with) near Turnberry Resort (which I do own) in Scotland, and filling up with fuel, with the crew staying overnight at Turnberry (they have good taste!). NOTHING TO DO WITH ME

I had nothing to do with the decision of our great @VP Mike Pence to stay overnight at one of the Trump owned resorts in Doonbeg, Ireland. Mike’s family has lived in Doonbeg for many years, and he thought that during his very busy European visit, he would stop and see his family!