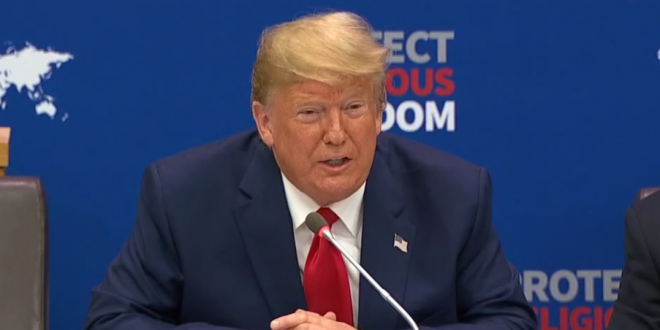 President Trump urged the president of Ukraine to contact Attorney General William P. Barr about opening a potential corruption investigation connected to former Vice President Joseph R. Biden Jr., according to a transcript of a July phone call at the center of accusations that Mr. Trump pressured a foreign leader to find dirt on a political rival.

The director of national intelligence and the inspector general for the intelligence community each referred a whistle-blower’s concerns about the call for a possible criminal investigation into the president’s actions, according to a Justice Department official.

Law enforcement officials reviewed the matters and declined to open an inquiry, the official said. During the call, Mr. Trump told President Volodymyr Zelensky of Ukraine that he should be in touch with both Mr. Barr and the president’s personal lawyer Rudolph W. Giuliani, according to the transcript released by the White House on Wednesday.

The conversation between Trump and Ukraine’s president is just one piece of a whistleblower’s complaint made in mid-August. The complaint is central to the impeachment inquiry announced Tuesday by House Speaker Nancy Pelosi.

Trump told the Ukrainian president “If you can look into it … it sounds horrible to me.” Trump was talking about unsubstantiated allegations that Biden sought to interfere with a Ukrainian prosecutor’s investigation of his son, Hunter.

Trump also confirmed that he ordered his staff to freeze nearly $400 million in aid to Ukraine a few days before the call. The president says he did nothing wrong.

"There's a lot of talk about Biden's son…so whatever you can do with the Attorney General would be great…if you can look into it."

“I would like to have the Attorney General call you or your people and I would like you to get to the bottom of it,” Trump says, according to the transcript. https://t.co/hdDDiskkni

The first thing POTUS does after congratulating him on his victory is insult Angela Merkel https://t.co/Jfeuh7Hpwa pic.twitter.com/U0oxmBnrye

Then he moves swiftly into praising Shokin, the former prosecutor who international democratic reformers said was “odious,” and “skillfully blocked reform.” He was also implicated in diamond theft. https://t.co/ERLLqOtCUH pic.twitter.com/G0N9wBtWeg

President Trump to President Zelensky: "I would like you to do us a favor though because our country has been through a lot and Ukraine knows a lot about it."

The Justice Department acknowledges in a statement that its public integrity section reviewed whether Trump committed a potential violation of federal campaign finance law. The criminal division closed the matter by taking no action.

I thought this transcript would be sterilized nothing. Instead it’s roughly a gazillion times worse than I thought it would be. Holy shit.

This confirms what we already knew: President Trump asked a foreign power to investigate a political rival. He’s unfit for office and needs to be impeached. https://t.co/2px07X8N7K

Important: This is a "transcript" with quotation marks. The disclaimer reads: CAUTION: A Memorandum of a Telephone Conversation (TELCON) is not a verbatim transcript of a discussion.

Well, I was wrong. The transcript is actually much worse for Trump than I thought. https://t.co/dB73F9hkj6

The transcript also has a foreign emoluments issue hiding in plain sight.

Zalenskiy: "Actually last time I traveled to the United States, I stayed in New York near Central Park and I stayed at the Trump Tower. I will talk to them and I hope to see them again in the future."