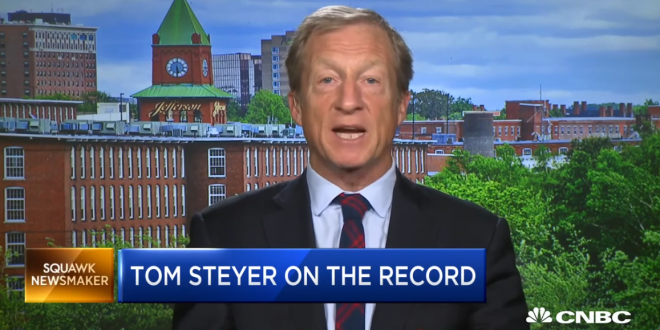 Tom Steyer, the billionaire and former hedge fund investor turned impeachment activist, became the 11th Democratic presidential candidate to qualify for the October debates on Sunday after a new poll showed him with 2 percent support in Nevada.

To make the cut, candidates must procure donations from 130,000 people and earn 2 percent support in four qualifying polls. Mr. Steyer fell one poll short of qualifying for the third Democratic debate in Houston this week. But the Democratic National Committee’s rules allow polls to carry over and count toward qualification for the fourth set of debates in Ohio, on Oct. 15 and 16.

Only 10 candidates earned enough support to appear in this week’s debate, and they will all appear on a single stage on Thursday night. But with 11 candidates now qualified for the October event, the D.N.C. will have the option to split that debate across two nights, as it did for the first two sets of debates in June and July.

Previous Rep. Justin Amash Blasts Trump Over Taliban Invitation
Next Air Force: So What If We Book Stays At Trump’s Hotel?