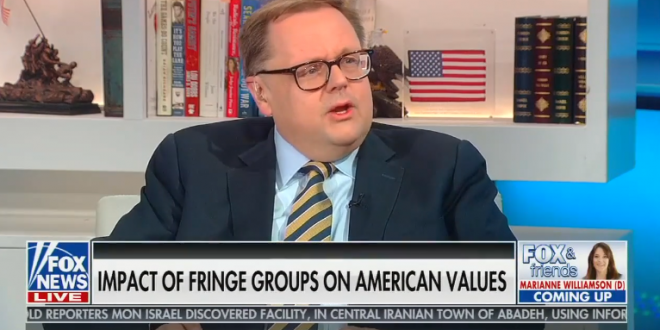 Todd Starnes: Public Schools Are Driving Us To Civil War

“I believe this president has saved the nation. You know, President Obama promised to fundamentally transform America. And he delivered on that campaign promise. And so President Trump has been undoing a lot of the damage that was done. He has stood up for religious liberty.

“He’s a pro-life president, probably the most pro-life president we’ve had in American history. And he’s done a great job of pushing back. I write about this in the book and we lay all of this out, including issues like Trump derangement syndrome.

“We’re on the verge of a civil war. How bad is it? It’s pretty bad. Especially when you look at the issues that divide us. And look at the polling data. My concern is not what happens over the next two years, it’s what’s happening over the next 10 years.

“You see, our public school system is being used as the engine to drive this social change. When you look at the polling data, it’s all there.” – Todd Starnes, promoting his new book Culture Jihad on Fox & Friends this morning.

Fox’s Todd Starnes suggests that a civil war could erupt in the United States “over the next 10 years,” and “our public school system is being used as the engine to drive this social change.” pic.twitter.com/0EFxyk5ZHL